To get the clearest picture of the word of God in the Scriptures it is absolutely necessary and essential that we discern between the “Old” Testament and the “New” Testament. Without discerning between the old and the new, we have to ignore the names given to each testament. Many combine the two covenants (testaments), and try to obey all the commands in the entire Bible. There are obvious problems such as the commandments to offer animal sacrifices. Then there is a command to go to Jerusalem three times a year for the three feasts. No Christian takes any of these commandments seriously because they have been nailed to the cross and do not apply to us today.

The Old Testament was not given until God formed the physical nation of Israel after they crossed the Red Sea. Now free from Egypt’s control, they had no national law to govern their new nation. God then gave 613 commandments to govern the nation. Most of these commandments (368) were negative to stop the Israelites from doing wrong. Another 268 commandments were given to direct Israelites and what they should do. These commandments included Temple worship and worship of God.

The New Testament was given to govern the spiritual kingdom of God. John the Baptist, Jesus, and the apostles all taught that the kingdom was at hand. Jesus promised that that kingdom would come in the lifetime of some of those standing in front of him as he taught. The Lord promised that the kingdom would come with power. That power came on the day of Pentecost when the apostles were baptized in the Holy Spirit, given power to speak in tongues, to lay their hands on others and give them the gifts of the Holy Spirit (Acts 8:14-19). From that point the kingdom of God had come in the spiritual nation of Israel was established. The rest of the New Testament is to govern that new spiritual nation of Israel.

The Israelites thought that they were keeping God’s covenant, and search the Scriptures to find eternal life (John 5:39). Jesus himself testified that the Pharisees gave their tithe or ten percent (Matthew 23:23). The Pharisees did keep the Sabbath and condemned Jesus for not keeping it. Most of the Jews kept the Passover where we find many of the Jews from all over the world gathered in the second chapter of Acts when Peter preached the first gospel sermon. The Israelites also obeyed several other commandments, but Jesus testified that none of them kept the Law that Moses gave (John 7:39). In Matthew 15 Jesus pointed out that the Jews added many words to the old covenant, which caused them not to obey some of the commands of God (Matt. 15:4-6). God had commanded the Israelites not to add to or to diminish any of his commandments so that they would keep all of them (Deut. 4:2).

As we pointed out previously, we all know that all the conditions of the covenant must be kept or the covenant is void. The Lord argued in Galatians 3:15, that men respected each other’s covenants (wills), and did not change anything. The new covenant is God’s “will,” which the Lord makes clear in Hebrews 9:16-17, where he says “For where a testament is, there must also of necessity be the death of the testator. For a testament is of force after men are dead: otherwise it is of no strength at all while the testator liveth.” We all know that the conditions of any man’s will are to be followed in every detail. Should we have the same attitude or mind toward the Lord’s will?

In the “Great Commission,” the Lord commanded the apostles to teach the disciples they made to observe all things that he had commanded them (Matt. 28:19-20). Jesus challenged his disciples in Luke 6:46, saying: “And why call ye me, Lord, Lord, and do not the things which I say?”

We all know that when any man makes a new covenant, he has made the first old, which naturally vanishes away. The Lord said the same thing concerning the Old Testament in Hebrews 8:13, “In that he saith, A new covenant, he hath made the first old. Now that which decayeth and waxeth old is ready to vanish away.” Should we acknowledge that Jesus nailed the handwriting of ordinances (10 Commandments) to his cross? Circumcision was a part of the old covenant. Today, if a man is circumcised to obey the Law of Moses, the Lord says that he is a debtor to do the whole law (Gal. 5:1-4). No man can have two masters. The Jews claimed that they were Moses disciples, and thus could not be Jesus disciples (John 9:28). They acknowledge that the previously blind man was Jesus disciple, and therefore could not be Moses’ disciple. If we try to keep two covenants we really fully confused.

Thus, it is necessary to see the difference between the old and the new covenants and between the Old and New Testaments. We need to continue in the new covenant (Heb. 8:9), listen to our master and Lord (Luke 6:46), and observe all that he commands us (Matt. 28:20).

Articles and Books by Beth Johnson

Jesus was Prophesied to be the King of the Kingdom

I saw in the night visions, and, behold, one like the Son of man came with the clouds of heaven, and came to the Ancient of days, and they brought him near before him. 14. And there was given him dominion, and glory, and a kingdom, that all people, nations, and languages, should serve him: his dominion is an everlasting dominion, which shall not pass away, and his kingdom that which shall not be destroyed (Dan. 7:13-14).

What does Matthew 28:18 say?  “And Jesus came and spake unto them, saying, All power is given unto me in heaven and in earth.”  After Jehovah gave Jesus (the son) all authority he would send the Holy Spirit by Jesus.

END_OF_DOCUMENT_TOKEN_TO_BE_REPLACED 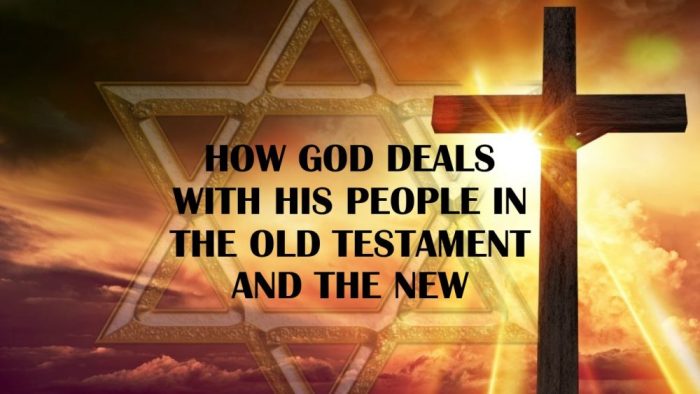 WE KNOW FROM Matthew 28:18 THAT JESUS HAS ALL AUTHORITY AFTER THE CROSS.

“And Jesus came and spake unto them, saying, All power is given unto me in heaven and in earth.”

JESUS GAVE LAWS THAT ARE OPPOSITE TO THE OLD TESTAMENT LAWS. Matt. 5:31-39).   HE SEEMED TO BE CONTRADICTING THE MOSAIC LAW.

31 It hath been said, Whosoever shall put away his wife, let him give her a writing of divorcement:

32 But I say unto you, That whosoever shall put away his wife, saving for the cause of fornication, causeth her to commit adultery: and whosoever shall marry her that is divorced committeth adultery.

33 Again, ye have heard that it hath been said by them of old time, Thou shalt not forswear thyself, but shalt perform unto the Lord thine oaths:

34 But I say unto you, Swear not at all; neither by heaven; for it is God’s throne:

35 Nor by the earth; for it is his footstool: neither by Jerusalem; for it is the city of the great King.

36 Neither shalt thou swear by thy head, because thou canst not make one hair white or black.

37 But let your communication be, Yea, yea; Nay, nay: for whatsoever is more than these cometh of evil.

38 Ye have heard that it hath been said, An eye for an eye, and a tooth for a tooth:

39 But I say unto you, That ye resist not evil: but whosoever shall smite thee on thy right cheek, turn to him the other also Matt. 5:31-39).

18 For verily I say unto you, Till heaven and earth pass, one jot or one tittle shall in no wise pass from the law, till all be fulfilled.

END_OF_DOCUMENT_TOKEN_TO_BE_REPLACED

WE HAVE SEEN THAT THE GREATEST AND THE SECOND GREATEST COMMANDS ARE NOT PART OF THE TEN ACCORDING TO Matt. 22:36-40.  THIS MAKES AT LEAST TWELVE COMMANDMENTS (NOT 10).

36 Master, which is the great commandment in the law?

38 This is the first and great commandment.

39 And the second is like unto it, Thou shalt love thy neighbour as thyself.

40 On these two commandments hang all the law and the prophets.

MOST BIBLE STUDENTS AGREE NUMBERS 18:26 IS NOT PART OF THE TEN COMMANDMENTS.

26 Thus speak unto the Levites, and say unto them, When ye take of the children of Israel the tithes which I have given you from them for your inheritance, then ye shall offer up an heave offering of it for the LORD, even a tenth part of the tithe.

END_OF_DOCUMENT_TOKEN_TO_BE_REPLACED

19 And they said unto Moses, Speak thou with us, and we will hear: but let not God speak with us, lest we die.

20 And Moses said unto the people, Fear not: for God is come to prove you, and that his fear may be before your faces, that ye sin not.

21 And the people stood afar off, and Moses drew near unto the thick darkness where God was.

22 And the LORD said unto Moses, Thus thou shalt say unto the children of Israel, Ye have seen that I have talked with you from heaven.

23 Ye shall not make with me gods of silver, neither shall ye make unto you gods of gold.

24 An altar of earth thou shalt make unto me, and shalt sacrifice thereon thy burnt offerings, and thy peace offerings, thy sheep, and thine oxen: in all places where I record my name I will come unto thee, and I will bless thee.

25 And if thou wilt make me an altar of stone, thou shalt not build it of hewn stone: for if thou lift up thy tool upon it, thou hast polluted it.

26 Neither shalt thou go up by steps unto mine altar, that thy nakedness be not discovered thereon.