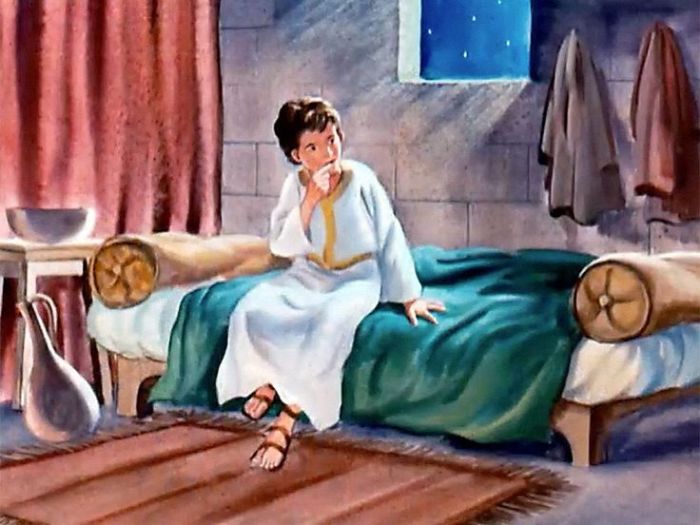 “But Samuel ministered before the Lord, being a child, girded with a linen ephod.  Moreover his mother made him a little coat, and brought it to him from year to year, when she came up with her husband to offer the yearly sacrifice” (1 Sam. 2:18-19).

Looking closely at this passage, we see several important things.  Primarily, we see Samuel was serving the Lord in the temple at a very young age.  Other passages about the life of Samuel tell us how Hannah prayed earnestly for him and vowed to give him back to the Lord if He would grant her a son.  Samuel’s birth, training and life were the direct results of Hannah’s love for God and her faithfulness to that vow made several years before.  Not only do we see Hannah’s love in training her son for that purpose, but we also see a further demonstration of a mother’s love in her yearly gift of a coat when she came to offer sacrifices with her husband at the feast.

Samuel wore an ephod, as did the priests with Ahimilech (1 Sam 22:18).  There is no question but that the ephod was at least closely associated with the priesthood. Apparently, it was not limited to the high priest.  Later in Samuel’s life, he was a judge, a seer and a prophet, but not a priest at this age.  However, as a descendent of Levi through Kohath (1 Chr. 6:38), the same tribe through which Aaron was descended, Samuel was priest’s helper (1 Chr. 6:1-3; 1 Sam. 3:1).  His father was an Ephrathite, because he lived in Mt. Ephraim, but not because he was descended from the tribe of Ephraim.  Hannah may also have been of the tribe of Levi, but there is no record of it.  In any case, Samuel wore the ephod, which shows it was not limited to the high priest or even to the priest.  Samuel was a prophet just as David was a prophet (Acts 2:29-30), and therefore authorized as much as David to wear an ephod.

Concerning Samuel’s ancestry, see 1 Samuel 7:9.  “And Samuel took a sucking lamb and offered it for a burnt offering wholly unto the Lord: and Samuel cried unto the Lord for Israel; and the Lord heard him.”  We know that King Saul was condemned for offering a sacrifice, which only the priests and Levites were authorized to do.  Samuel was at least a Levite (if not a priest) or he would have been condemned along with King Saul.

How and when did little Samuel wear the coat his mother made him?  It is not generally known, but we may assume he used it to cover himself in cold weather or perhaps even to sleep in at night.  It may have been brightly colored like the coat Jacob made for Joseph, but we cannot say.  Nevertheless, it was a gift of love from a mother who never forgot the child she could not redeem (Num. 18:15) because of her vow.  Her faithfulness in keeping her vow was paramount, but her faithfulness in showing love both to her God and to her son was never laid aside.

The Four Garments of all Priests

The first four garments that the priests wore in their daily activities before the Lord.  The breeches, coat, the mitre, and girdle, were to be worn by the all the priests and the high priest.

Each of these garments also was symbolic of certain acts of atonement.

The girdle or belt – atonement for a sinful heart, improper thoughts and theft

The turban or hat and the mitre of the High Priest – atonement for haughtiness or pride of countenance. (Ps. 10:4)

The breeches – atonement for unchastity and sexual transgressions (Matt 5:28)

(2) Woven Coat. The coat of fine linen or cotton. (Exod. xxxix :27) which was worn by of needlework’ (Exod. xxxix :29). Josephus de scribes it as often going round, four lingers broad, but so loosely woven that it might be taken for the skin of a serpent; and that it was embroidered with flowers of scarlet, and purple, and blue, but that the warp was nothing but linen. The beginning of its circumvolution was at the breast; and when it had gone often round, it was there tied, and hung loosely down to the ankles while the priest was not engaged in any laborious service, for in that position it appeared in the most men in general (Gen. xxxvii :3); also by women (2 Sam. xiii:18; Cant. v :3), next to the skin. It was to be of woven work. Josephus states that it reached down to the feet, and sat close to the body ; and had sleeves, which were tied fast to the arms; and was girded to the breast a little above the elbows by a girdle. It had a narrow aperture about the neck, and was tied with certain strings hanging down from the edge over the breast and back, and was fastened above each shoulder (Antiq. iii, 7, 2). But this garment, in the case of the priests and high-priest, was to be broidered (Exod. :4). A broidered coat, by which Gesenius understands a coat of cloth worked in checkers or cells.

“But Saul and the people spared Agag, and the best of the sheep, and of the oxen, and of the fatlings, and the lambs, and all that was good, and would not utterly destroy them: but every thing that was vile and refuse, that they destroyed utterly” (1 Sam. 15:9).

Saul is one of the most tragic figures in the Old Testament. Head and shoulders above all the other men in Israel, he began his reign with great promise but ended it in shame.

“And he (Kish) had a son, whose name was Saul, a choice young man, and a goodly: and there was not among the children of Israel a goodlier person than he: from his shoulders and upward he was higher than any of the people” (1 Sam. 9:2).

As Israel’s first king, Saul had the opportunity to be an example for all future rulers, but his covetousness for the praise of men and for power over them, was his downfall.

Saul had other admirable physical qualities that made him fit to be received by Israel during the period immediately after the last judge.  Because of his stature, he was quickly accepted by the people.  Furthermore, the Lord used him as a good military leader, as shown by his victories early in his reign.  Here we have a king who was not only is a warrior himself, but a man whose sons were also warriors.  Note that his son Jonathan’s victory over the Philistines comes the first year after King Saul was anointed (1 Sam. 14:6-16).

One of Saul’s first sins was his failure to wait for Samuel at Gilgal (1 Sam. 13:8-9). The Philistines had gathered together against Israel with a large army and the Israelites had fled to hide themselves.  Saul had to know if God wanted him to go to battle or not, and in order to approach God, he had to offer a sacrifice.  There he assumed the role of a priest by making a sacrifice to ask for God’s blessing and to seek God’s counsel. His excuse for acting as a priest was totally unacceptable:

And Samuel said, What hast thou done? And Saul said, Because I saw that the people were scattered from me, and that thou camest not within the days appointed, and that the Philistines gathered themselves together at Michmash; 12 Therefore said I, The Philistines will come down now upon me to Gilgal, and I have not made supplication unto the LORD: I forced myself therefore, and offered a burnt offering” (1 Sam. 13:11-12).

He was willing to force himself to disobey God so he could win the people’s favor.  Strangely, he determined to disobey God in order to persuade God to help him. Saul knew he had done wrong, but he justified his sin instead of following the law exactly (Lev. 3:5 and Lev. 6:9-13).  There is no doubt in this incident that he knew that only the priests of God (descendants of Aaron) were to offer a sacrifice, and he knew Samuel’s purpose and promise was to do just that.  So why is he so faithless in following a command of God he knows to do?  He feared losing the people! He coveted their allegiance.

Another sin followed soon afterward. After defeating Moab, Ammon, and Edom, Saul was told by Samuel to go to war against the Amalekites and to “…slay both man and woman, infant and suckling, ox and sheep, camel and ass” (1 Sam. 15:3). Saul carried out his instructions well except for two things: he spared the life of Agag, the king, and saved the best of the animals. When he returned from the battle, he lied to himself and to Samuel and told Samuel that he had “performed the commandment of the Lord.”  He imagined that disobedience to some of God’s commands was acceptable.  Samuel approached Saul that day with a heavy burden on his heart.  King Saul’s problem was that he had turned back from following God.  During the night of the battle, God had spoken to Samuel and said, “It repenteth me that I have set up Saul to be king: for he is turned back from following me, and hath not performed my commandments” (1 Sam. 15:11).

At the end of verse 15 we see that Samuel was grieved and cried all night to the Lord—interceding for Saul that he might remain Israel’s king.  Saul was a mighty man of valor and a great military leader, but his covetousness of the people’s praise and allegiance had overtaken him, causing him to sin greatly.  Was being a military leader enough?  Was having a handsome well-liked king the plan God had in mind for Israel?  No, God was seeking a man who would obey all His commands—a spiritual leader whose thought was not for himself, but for serving God by training the people in righteousness. King Saul had not remembered the one who had set him up as king, given him his power nor why.  God had called King Saul to do His (God’s) work, not his own.  King Saul’s first and foremost thought should have been, “What shall I render unto the LORD for all his benefits toward me? I will take the cup of salvation, and call upon the name of the LORD. I will pay my vows unto the LORD now in the presence of all his people (Psa. 116:12-14).

From that time forward, Saul exhausted his total strength and power to pursue one whom he perceived to be his enemy, when his greatest enemy was actually himself.  He wasted all his time and energy in fruitless attempts on David’s life because he could not accept that God had removed him from being King over Israel.