IN THE HEBREW SCRIPTURES, WHERE IS THE FIRST INDICATION OF CHILDREN BEING ADOPTED?

LATER WE SEE CLEAR EXAMPLES OF ADOPTIONS IN OTHER PASSAGES. 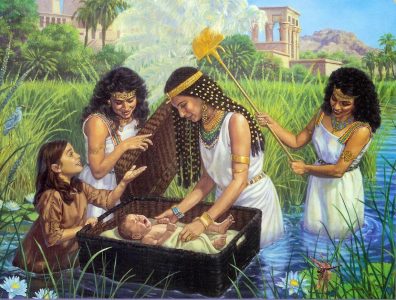 In an all-time irony of how the LORD works his purpose (Rom. 8:28, 29), Moses the savior of the Jewish people, was reared in the house of the enemy of the Jews. Moses was the son of Amram and Yochebed of the tribe of Levi, the priestly tribe. Miriam and Aaron were his brother and sister. He was born in Egypt during the period in which the Israelites (Hebrews) had become a threat to the Egyptians simply because of their large population. The Pharaoh had ordered that all newborn male Hebrew children be cast into the Nile to drown. Two things would be accomplished by this action: 1. The murder of the Hebrew male children would diminish that nation. 2. The Nile River god would accept the sacrifice at the same time.

Amram and Yochebed took their newborn son, placed him in a waterproof basket and hid him in the tall grasses of the Nile. Meanwhile, his sister Miriam hid and watched over the baby from a distance. A group of women and their servants were bathing nearby. Pharaoh’s daughter adopted him when he was just three months old. Moses’ parents did not want to give their child to the Egyptian princess, but if they had tried to keep him, they knew he would have died because of the Egyptian Pharaoh’s decree, that no Hebrew male child could live. The Pharaoh’s daughter, hearing the baby cry, found and rescued him. She named him “Moses,” meaning, “drawn from the water.” Her desire for a son fulfilled, she made certain that he had the best of everything, including education (Exo. 2:1-10 KJV).

Moses was brought up in the splendor of the Egyptian court as the Pharaoh’s daughter’s adopted son. Grown to manhood, he was aware of his Hebraic roots and shared a deep compassion for his oppressed relatives. He became furious while witnessing an Egyptian master brutally beating a Hebrew slave, and he impulsively killed the Egyptian. Fearing the Pharaoh’s punishment, he fled into the desert of Midian, becoming a shepherd for Jethro, a Midianite priest whose daughter Zipporah he later married. While tending the flocks on Horeb Mountain in the wilderness, he saw a bush burning yet not turning to ash. He heard a voice from within the bush telling him that he had been chosen to serve as one to lead the children of Israel out of Egypt. God told Moses to declare the unity of God to his people. At that time most Israelites were worshipping the many gods of the Egyptians. Moses was to tell them that there was only one God (Exo. 3:12-15).

The tremendous responsibility of Moses’s task, his feeling of inadequacy because of his own position as a shepherd, and his inability to speak well, brought forth a hesitancy and lack of confidence. The Divine answer was “Who made man’s mouth?” He was then assured that Aaron, his brother, could speak well and would serve as his spokesman both to the children of Israel and to the Pharaoh. The promised destination for the Israelites’ journey was a “land flowing with milk and honey.”

What was the “time” in which Moses was born? What political events had transpired? Stephen in Acts 7:1-60 gives those details precisely.

“But when the time of the promise drew nigh, which God had sworn to Abraham, the people grew and multiplied in Egypt, 18 Till another king arose, which knew not Joseph. 19 The same dealt subtilly with our kindred, and evil entreated our fathers, so that they cast out their young children, to the end they might not live 20 In which time Moses was born, and was exceeding fair, and nourished up in his father’s house three months: 21 And when he was cast out, Pharaoh’s daughter took him up, and nourished him for her own son. 22 And Moses was learned in all the wisdom of the Egyptians, and was mighty in words and in deeds” (Acts 7:17-22 KJV).

What cruelties did the children of Israel endure at the hands of the Egyptians?

“…. And they (the Israelite slaves) met Moses and Aaron, who stood in the way, as they came forth from Pharaoh: 21 And they said unto them, The Lord look upon you, and judge; because ye have made our savour to be abhorred in the eyes of Pharaoh, and in the eyes of his servants, to put a sword in their hand to slay us. 22 And Moses returned unto the Lord, and said, Lord, wherefore hast thou so evil entreated this people? why is it that thou hast sent me? 23 For since I came to Pharaoh to speak in thy name, he hath done evil to this people; neither hast thou delivered thy people at all” (Exo. 3:6-9; Exo. 5:6-23 KJV).

ULTIMATELY, MOSES REJECTED HIS ADOPTIVE FAMILY. CONSIDER FOR A MOMENT TWO REASONS FOR HIS ACTIONS.

“By faith Moses, when he was come to years, refused to be called the son of Pharaoh’s daughter; 25 Choosing rather to suffer affliction with the people of God, than to enjoy the pleasures of sin for a season; 26 Esteeming the reproach of Christ greater riches than the treasures in Egypt: for he had respect unto the recompence of the reward” (Heb. 11:24-25 KJV).

He first chose God’s people because of the Egyptian slave driver, who made him to flee from Egypt into the land of Midean. Later, Moses deliberately chose his people because they were God’s people. God planned to bring the Christ through the nation of Israel.  He must have learned from God himself about the eternal reward God had for his people or he would not have had respect unto the recompense of the reward.

A Response to the original BREATHING ROOM

Not that I speak in respect of want: for I have learned, in whatsoever state I am, therewith to be content. I know both how to be abased, and I know how to abound: every where and in all things I am instructed both to be full and to be hungry, both to abound and to suffer need. I can do all things through Christ which strengtheneth me (Phil. 4:11-13).

END_OF_DOCUMENT_TOKEN_TO_BE_REPLACED

An announcement for some of you and a reminder for others:

Links to the scripture songs are here:
Let me express my appreciation to the children of family members who have made these possible for posting.
Beth