Like most idealists who come to India for the first time, we initially expected to see a storybook land of maharajas, magic carpets, temples and mosques to inspire our imaginations. However, living here on the ground with the people is far different than just touching the tarmac, going to a posh hotel and chronicling a visit with photographs once or twice a year. There is a harsh reality of having three times the number of people the US census claims all squashed into one-third the land space. To get some idea of what it really is, multiply your family by three and then imagine two-thirds less living space!  Or multiply your family by nine in the same living space.  That’s mind boggling.

At first I was repulsed by the filthy streets and buildings, until I considered how anyone would remedy it more than just inside whatever dwelling he claimed. Reportedly, the Brahman community has at least five baths a day and washes all vegetables and grains in five different waters before cooking. Others with less to work with don’t always do as well.  The little children are to be pitied the most.  Many years ago, families did not even name their babies until they were older because the likelihood of their survival was slim.  Thus the custom of having baby naming ceremonies and birthday parties came to be an important part of the culture.

The garbage dumps, both those set aside by the government and the myriad, which are just outgrowths of carelessness, always seemed to bother me the most until I realized that some animals and even some humans subsisted on what they found there. Gradually I learned to ignore those unsightly places and be glad the the poor could find a meal.

These days I don’t usually cry about much of anything even though I used to when I was younger. Now that the “horrormones” have abandoned me, I have been able to endure much more than I ever believed I could. At times I have wanted to cry when an incredible sadness swept into my chest cavity, yet no tears came to give relief.  The children touch my heart the most.  I see them on the way to school every day and think how small and defenseless they are.  Yet in spite of all they endure, they learn and are happy.

That was pretty much my outlook until our grandchildren and their parents came to visit recently. One granddaughter has graduated from High School and is planning to go to college this fall. Her life has always been about animals and her career goal was to be a veterinarian. It was her attentiveness to one poor beast that made me cry for the first time in a long time.

Note the poor dog is nursing pups–literally giving her life for the lives of her offspring.  She had been hiding four little ones, three of which were dead within the month after they ventured out into the open, either from being eaten by bigger dogs or being poisoned by heartless humans. 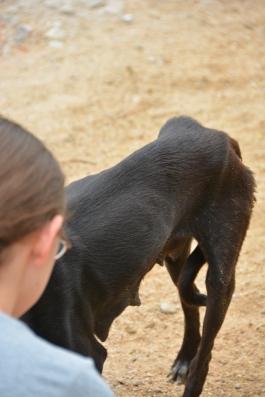 Having read Freedom at Midnight, I Poolan Devi and other non-fiction documentaries about India, I know some humans have given their lives for their children.  Their bravery in the midst of poverty is beyond Western imagination.  Though it is impossible, even unthinkable, to give every man, woman and child a bed, it is possible to teach compassion and kindness in a world where those qualities seem to have disappeared.

And guess what?  I continue to feed this dog for my granddaughter’s sake even though she has gone back home. We have had the dog spayed and given her rabies and distemper injections.  She is good to go.

31 thoughts on “IT MOVED ME TO TEARS”