Recently, Beth asked me to write about lessons I have learned from my mother. Thinking about my remarkable mother, who raised six children and has 19 grandchildren, I agreed. Old habits persist, so I called my mother and asked for permission to share what I’ve learned from her. There was a long silence on her end of the phone. When she responded, her answer encapsulated one of the most valuable lessons she taught me: “I should write about what I’ve learned from you, Sandi. I have learned so much from all my kids.” 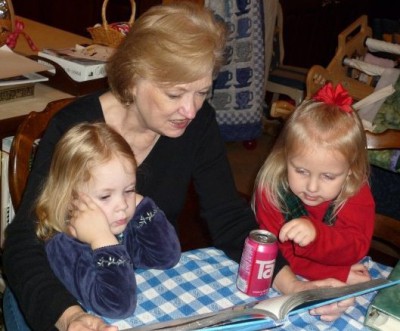 My mother went on to elaborate about the many things she has learned from her children. We are a bookish family, so books headed the list: the Tolkien books my brother brought home from his junior high English class; the Laura Ingalls Wilder books that I stumbled upon in the library (I liked the “W” section because of Gertrude Chandler Warner); the Mother-Daughter Book Club series that my sister Lesley discovered recently. Music soon followed: my mother’s introduction to stringed instruments via my sister Elizabeth, who came home from school and asked to take violin lessons; her acquaintance with opera and chamber music, courtesy of my younger brother. Our conversation was interrupted before she could name something she had learned from each of her children, but I remember well how my youngest sister talked my mother into learning how to lay tile in our dining room.

What strikes me is that my mother herself is a learner: in all the years that I have known her, she has always been willing to learn a new skill, cook a new recipe, read a new book, or visit a new destination. New technology? Not a problem: she owned a digital camera, an iTouch, a Nook, a smartphone, and an HDTV before I did. In her 72 years of life, she has never stopped learning. Although I may have learned more profound lessons from my mother, her lifestyle of learning has influenced me immeasurably.

Take quilting, for example. Although my mother knew how to sew when she got married, her skills were limited to making clothes and curtains. One day, as she flipped through a decorating magazine, she admired the quilts displayed in a featured home. Lacking the resources to buy handmade quilts, my mother decided to make them herself. Slowly, she learned to quilt, and today her home is filled with colorful quilts of all shapes and sizes. She is a “can-do” person, an optimist. While at times she has been an autodidact, she has also sought out the expertise of others, taking classes in cake decoration, quilting techniques, music appreciation, painting, and so on. Not all her efforts to learn a new skill were rewarded with the success that she achieved in quilting, but she expanded her horizons with each new pursuit.

Growing up with someone who tried new things was never dull. When Mom met an interesting couple manning a booth at the county fair, we all got to know that couple when she invited them over for dinner. If we objected to eating an unfamiliar food or going to a museum, she would simply respond, “It’s a cultural experience.”  She brought richness into our lives on an almost daily basis. Most importantly, she has never seen herself as having arrived or being complete. She finds the world an exciting place, and her habit of learning new things has not only kept her young at heart but also turned her into an accomplished woman–perhaps not up to Lady Catherine de Bourgh’s standards, but who is?

Why is learning so important? When we decide that we are content with our lives as they are, we shut the door to growth. As I understand the Christian’s walk with God, we should be growing in Him each day, not stagnating in our old ways (Colossians 1:6). If we are not open to learning, we may also close the door on new relationships. A scene from one of Mom’s favorite movies, the 1963 thriller Charade, illustrates this point: when Cary Grant introduces himself to Audrey Hepburn, Hepburn flippantly responds, “I already know an awful lot of people, so until one of them dies I couldn’t possibly meet anyone else.” In the context of the movie, someone does die, leaving an empty spot in Hepburn’s circle for Grant (as if anyone would have actually turned down the opportunity to get to know Cary Grant). Many of us go through life in that way, unwilling to take a chance on a new relationship or find time for a new person. Not so my mother! Although she is not an extrovert by nature, there is always room in her life for a new friend or for a new lesson, even if she is learning it from her youngest grandchild.

My mother’s example of exploring what is new to her, rather than fearing it, has affected the way I interact with my own children. When one of my children “gets into” a new series of books or unfamiliar television show, I make an effort to read those books or watch that show–not to spy on the child but to strengthen my connection with him and, I hope, to enrich my own life. Not every new show on television passes the Philippians 4:8 test–quite the contrary–and my husband and I might decide that we need to become regular watchers of a show with the child, in order to have a better idea of its influences on his impressionable mind and to discuss the show later. Where did I learn to watch new shows with my children? At my mother’s knee, of course!

With my own nest of children slowly emptying, my mother’s lesson of learning as a way of life may take on new meaning for my future. If I find myself discontent with my life or my appearance, maybe I could take up a new hobby or learn a new discipline? Candidly, I sometimes feel daunted by the thought of learning something new. Every skill is not accessible to every individual, and some windows of learning close with age: skills that involve muscles, such as playing an instrument or performing a pirouette, become more difficult as we get older. But when I reflect on my mother’s approach, I take heart: she has not lived her life in the fear of failure, and she has a household of quilts to show for her efforts. To take a line from the movie Strictly Ballroom, “A life lived in fear is a life half-lived.” 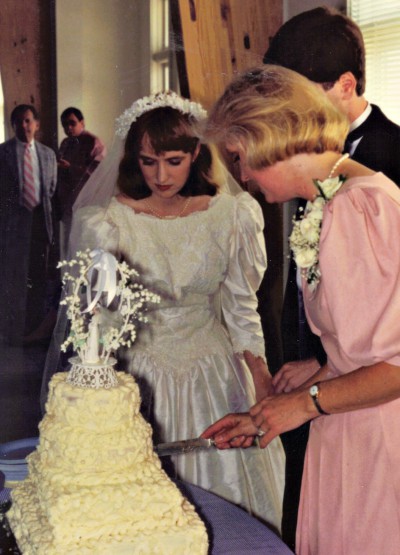 I know that it can take more than personal determination to learn new ways (I Corinthians 10:13). Social and domestic skills don’t come to me easily, and I feel humbled as I write, knowing there is much that I need to learn or refine. As I read Philippians 2:13, I am reminded that “it is God who works in you, both to will and to work for His good pleasure.” The first chapter of Proverbs makes the point that the fear of the Lord is the beginning of true wisdom. In light of Proverbs 1:5–“Let the wise hear and increase in learning, and the one who understands obtain guidance”–even my mother still has some learning to do!